Creating your Masterpiece in the desert with Sameh Khatib

“You are only adding zeroes [to your salary] and zeroes is nothing” Sameh Khatib, owner of Palmera Camp, Wadi Rum and the leading Arabian horse breeder in Jordan.

What calls you most—the mountains, the ocean or the desert?

For Sameh Khatib it is the desert. As a bedouin, he always dreamed of returning to his roots. There, in the space of nothingness, he has built his Masterpiece, a camp for adventure travellers, with his own hands and a lot of love.

What makes this camp remarkable is the food—it was SO tasty—the organic design—it blends into the landscape—the staff—they were so friendly—and its eco-credentials—you could remove the camp and the desert would remain untouched.

Sameh built the camp himself, without plans or designs—it just emerged step by step in his head. His journey is a powerful illustration of what it takes to create your Masterpiece—obstacles and all. I couldn’t believe what he shared with me… he created his Masterpiece based on all the principles I’ve been talking about for the last decade and we only met ‘by chance’ as we stayed here as part of the #Masterpiece | Creation journey.

We also discuss:
— How he values money;
— Why doing what you love is so important;
— Why he hired his staff twice;
— How to communicate to dogs, horses, falcons and his team. 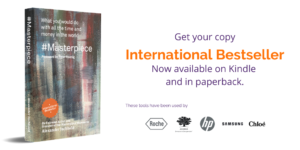